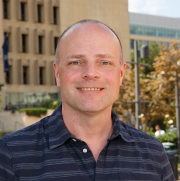 His previous work was at George Washington University’s Libraries and Academic Innovation where he developed and managed websites as part of the Scholarly Technology team. Prior to that he was the web manager for the Harvey Goldberg Center for Excellence in Teaching at The Ohio State University, and the Artistic Director of Hubris Games.

He attended Carnegie-Mellon University’s School of Drama, NYU Tisch School for the Arts, and Sarah Lawrence College. He spent parts of his childhood in Europe and Southeast Asia, and he’s lived in Memphis, New York, San Francisco, Columbus, and the District of Columbia.

He’s a Drupal Association member and has been at every DrupalCon since Denver 2012.

Christian is married with three cats.

I’m a full stack Drupal developer for the World Resources Institute in Washington DC. I’m the technical lead and web architect for our core institutional sites. Before that I worked for the Scholarly Technology Group at GW Libraries in Drupal, Omeka, and a little Ruby on Rails, and I was the technical lead for their content management systems (like this https://library.gwu.edu).

My first stabs at web development were in the late 90s when I was the Director of Hubris Games.

I’ve even made a (very small) contribution to Drupal core:

I have a sandbox module on Drupal.org https://www.drupal.org/sandbox/studiozut/2303677 and have contributed to the Sufia repository project (part of the Hydra Project https://projecthydra.org) https://github.com/projecthydra/sufia.

So yeah, my fav commit message from this project so far #webdev pic.twitter.com/dZ6WGkvREl

I built this using Jekyll and github pages, a simple and low maintenance way to build and maintain a content management system. My old team at GW Libraries runs a workshop on this!

You can see my implementation of Jekyll on github: https://github.com/StudioZut/studiozut.github.io

This is the base Jekyll theme. You can find out more info about customizing your Jekyll theme, as well as basic Jekyll usage documentation at jekyllrb.com

You can find the source code for the new Jekyll theme at: jekyll / minima

You can find the source code for Jekyll at jekyll / jekyll